Welcome to the first #ThrowBackThursday post exclusively for Princethorpe Connect members. Each month I'll be sharing exciting content from the archive to help bring back happy memories. Entrance to The Clarkson Theatre after the renovations in 2017
With the sounds of 'We Will Rock You' drifting up to the archive storeroom from The Clarkson Theatre as the pupils prepare for this year spectacular performance, it got me thinking about what musical performances the theatre has been witness to in the past. A quick search on the archive catalogue shows that I was spoilt for choice when it came to selecting material; indeed if anything there was almost too much to choose from.

Whilst it wasn't the first musical to be performed at Princethorpe College, 'Paint Your Wagon' is the first musical that we have a programme  for and, thanks to an article in the 1977 Princethorpe Magazine, a review. The lack of female students did not dampen the enthusiasm to take on the key roles and I am extremely sorry that no photographic evidence survives of the willing students that according to M Woodward's review spent the Spring term 'Mastering... the steps of the can-can (which) kept a number of the cast occupied - and an even greater number entertained...' (Princethorpe 1977, Ref: PC.27.3.1.08)

Princethorpe College Musical Society continued to stage ambitious performances when they staged 'Joseph and the Amazing Technicolor Dreamcoat' in the Autumn Term of 1979. As they had already performed the musical in 1974, the actors were keen to do something different with it so the decision was made to transform the setting from Ancient Egypt to the 1950s, complete with Teddy Boys and a rather Elvis-looking Pharoah if the front cover is to be believed. I am sure that the audience were all saying 'Thank You Very Much' after they watched it. 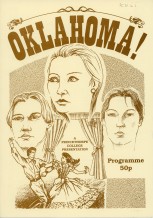 If the 1991 review of Oklahoma is to be believed, by this point the staging of a musical was greeted with slightly less enthusiasm that in previous years. It didn't take long for the boys to be persuaded though and soon the audience were to be transported from rural Warwickshire to the plains of the American Wild West. Alongisde staged fights that soon collapsed into giggling heaps and potentially lethal lasso practise, the actors soon embraced their characters with enthusiasm. At least two stayed there according to the review as '... everywhere, all over the school, in classrooms, toilets, behind bushes, you'd come across Danny and Conrad silently circling each other, eyes fixed, trigger-fingers poised, locked in mortal combat in pirsuit of the blonde, blue-eyed girl.' (Princethorpe 1991, Ref: PC.27.3.1.16) 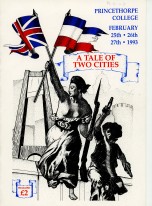 The success of Oklahoma must have reinvigorated a love of musicals and in 1993 students at the college performed a musical adaptation of 'A Tale of Two Cities'. This adaptation is all the more impressive when you consider that the music and lyrics were written by two of Princethorpe's own students, Rinaldo Merlo and Chris James. I wonder whether the setting of the French Revolution gained even more significance for having been performed at Princethorpe College. After all, without the revolution there would have been no need for the nuns who founded St Mary's Priory, which became Princethorpe College in 1966, to have fled France to find safety on British shores in the first place.

I'm ending this archival reminiscence with a programme cover that look plain in comparison to the other ones I have shared. It was for 'An Evening of Entertainment' that was staged in 1999. Involving students from across the school, the concert was held in honour of the late Father James McManus O.S.B. who had played such an important role at Princethorpe College over the years. The concert also helped to raise £1,500 for the Father McManus Chapel Restoration Fund.
Would you like to share a memory from your time performing on stage at Princethorpe College? Do you have an photographs or items relating to a school performance that you would be willing to donate to the archives? If so please do get in touch with me at janetteratcliffe@princethorpe.co.uk - after all, as Queen says 'These Are The Days of Our Lives'. Greetings from Princethorpe College - Reflections from former and long-standing teachers put together for the Hong Kong … More... You can't fail to be impressed by the verdant fields surrounding the College, idyllic countryside complete with cows and sheep. But Princethorpe has n… More...