In March's #ThrowBackThursday post, take a closer look at the origins of Crackley Hall School and the Sisters of Mercy religious order that helped to shape it. St Joseph's Convent School at Gosford Green. Image courtesy of the Union of the Sisters of Mercy GB
With the upcoming 75th anniversary celebrations, I have had the opportunity to learn more about the history of St Joseph’s when it was run by the Sisters of Mercy. During my reading, I have been struck by how it is essentially a history of strong, dedicated women who were determined to make a positive impact on the world.

The Origins of the Sisters of Mercy
When Catherine McAuley received a large inheritance in 1822, she decided to use the money to build a House of Mercy on Baggot Street in Dublin where homeless and impoverished girls and women could be sheltered and educated. As a result of her good works, she was encouraged to found a religious congregation by the Archbishop of Dublin Daniel Murray and in 1831, she and two companions, Elizabeth Harley and Anna Maria Doyle, became the first Sisters of Mercy. On her return to the house at Baggot Street after her Profession, she was appointed as mother superior by the Archbishop, though it was not a title that she used to refer to herself. Before her death in 1841 from tuberculosis, she had established convent houses throughout Ireland and England, including houses in Bermondsey, London, and Handsworth, Birmingham.[1] In each of the convents, the focus was on ‘the instruction of poor girls, visitation of the sick and the protection of distressed women of good character… without the usual strict enclosure… to see and meet local needs.’[2] 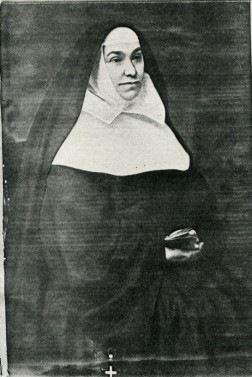 Image courtesy of the Union of the Sisters of Mercy GB Archive
It was from the Bermondsey Convent that the founder of St Joseph’s Day and Boarding  School for Girls, Mother Mary Elizabeth Vincent Watkins, came in 1862 with Sisters Teresa Haverty and Aloysia Murphy. From the 1850s, the Benedictine Fathers at St Osburg’s, Coventry, had been requesting the Sisters of Mercy’s help in supporting and educating the young girls and women working in Coventry’s silk mills. Opened in a large Victorian building on Walsgrave Road, overlooking Gosford Green, the school flourished on the site until the advent of the Second World War led first to its evacuation and then to its destruction.
Upheaval for the Community
Under the guidance of Mother Mary Magdalen Pennington, the school was evacuated from Coventry to Stoneleigh Abbey in 1939 after an invitation by Lord and Lady Leigh. Initially 98 children and some of the Sisters moved to Stoneleigh but when a bomb damaged the chapel and classrooms at Gosford Green, the rest of the community joined them. It was a good thing that they did as further bombing destroyed the buildings in April 1941. 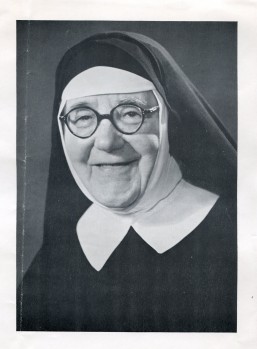 Image courtesy of the Union of the Sisters of Mercy GB Archive
When it became clear that the Sisters of Mercy would not be able to return to their pre-war location, Mother Mary Magdalen Pennington was responsible for the purchase of Offchurch House which housed the senior school from 1941 until circa. 1950. She was also responsible for the purchases of that Crackley Hall and The Gables and orchestrated the move to Kenilworth to enable the school and community to be reunited. That was not the end of her influence on the buildings and landscape that made up St. Joseph’s though as the gymnasium, Chapel, Junior School and a block containing new science laboratories, Domestic Science, Needlework and Art rooms were all built during the 25 years she was Superior of the community. Her obituary in the 1968-1969 edition of Peeper’s Pie (reference SJ.27.03.04) noted that whilst she was forced to give up teaching as a result of all of her other duties as Superior, Mother Mary Magdalen continued to take a keen interest in the education of all of the girls.

Joining the Sisters of Mercy after leaving her home in County Mayo, Sister Mary Patrick Herbert is another individual who has left her mark on the history of St Joseph’s. She was heavily involved in the move to Kenilworth taking responsibility for the ‘organising of classes, timetables, syllabuses, books and furniture’[4] – all of which are essential to the running of a school.

Highly educated in her own right with a History degree from Oxford and a Diploma in Education from Cambridge, Sister Mary Patrick continued teaching Fifth and Sixth Form examination forms alongside her role as headmistress of a rapidly expanding school after she was appointed in 1958. Keen to develop the sporting and academic facilities and to push all of the girls to achieve high standards, Sister Mary Patrick was also determined to maintain the Christian character and tone of the education that St Joseph’s offered.

Alongside Mother Mary Magdalen, Sister Mary Patrick was responsible for the extensive building and landscaping projects that helped to shape St Joseph’s in the 1960s and 1970s.  She was a key driver in the project to build a new school hall and when it was opened in November 1972, she saw it as an opportunity to be both a memorial to Mother Mary Magdalen (who had died in December 1968) and as a valuable asset to the school. In the same year she also oversaw further building works after the decision was made to admit boys to the Preparatory School.

When Sister Mary Patrick retired from the role of headmistress after 23 years in 1981, she was determined to leave the school in the best possible shape. Before handing the reins over to Sister Philomena Bowers she implemented an extensive refurbishment programme, including having the roof repaired, the school redecorated and many of the outside areas such as the tennis courts resurfaced. Retiring from her role at the school did not mean that Sister Mary Patrick took life easy however; instead she headed out into the community and visited people who found themselves housebound within Kenilworth. 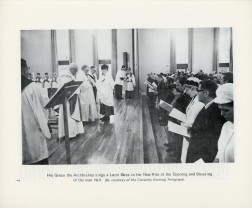 The Sisters of Mercy’s Time Comes to an End

When Sister Philomena Bowers took charge of the school in 1981 after having taught at a large comprehensive school for 6 years, pupils and parents may have been worried about how anyone could follow Sister Mary Patrick. Sister Philomena quickly allayed any fears with her door always open to help, her readiness to listen and her sense of humour, she quickly made an impact on the school. The implementation of a Morning Assembly which brought the school community together with a daily theme and a different group of girls involved each day led to greater participation from the students and increased self-confidence in public speaking.[5]

It was during Sister Philomena’s headship that a decision was made which would have a significant impact on St Joseph’s Convent School. In 1988, the Sisters of Mercy reviewed their apostolate and decided to focus on their ministries that brought them into contact with the poor and the powerless. As a result, the order decided to withdraw from the independent schools’ sector and, whilst it must have been personally a very difficult time, Sister Philomena managed the successful transfer of the school to a lay body of trustees in 1990 and the subsequent dispersal of the community to other houses in 1991. Ending the order’s 128-years of service to education in Coventry. 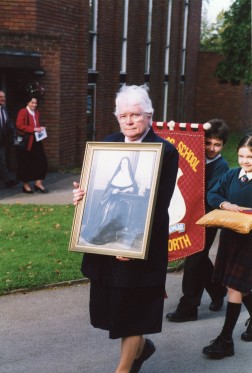 Since we can't get out into nature in our usual way, I thought that I would bring nature to you in the form of beautiful programmes and evocative descriptions from the girls at St … More... Princethorpe Connect – A Spirit of Family in difficult times