Travel Back in Time to the Crescent School of Yesteryear

It was with great delight that I had the opportunity to talk to one of the first Crescent School pupils, Fiona Douglas, about her memories of her school days. As readers of my #ThrowBackThursday and Twitter posts will know, I often lament the loss of records relating to the early days of the Foundation Schools so you can imagine my delight when I was contacted by one of the first pupils to attend Crescent School. What followed was a delightful hour talking to Fiona Douglas (nee Loughery) on the phone about her personal memories of her time at the school and (as with conversations I have had with other past pupils) it soon became clear that Crescent School brought back many warm, happy memories. I am always keen to add oral history accounts to the archive as each person brings their own stories and memories about the school. If you are interested in being interviewed about your time at Crescent School, then please do send me an email at JanetteRatcliffe@princethorpe.co.uk and I would be delighted to arrange a time that suits you best.

Crescent School was originally founded by Mrs Eve Mortimer to educate the children of Rugby masters like Fiona, whose father was a master at Rugby School from 1934 until 1961 when he retired. Mrs Mortimer’s school was initially based at Troy House but it quickly outgrew those premises and moved to Horton Crescent, and it is from there that the school got its name.

Fiona was one of the oldest pupils at the school and remembers being part of a group of about 8 children that made the move to Horton Crescent when it opened. In the early days, class sizes were small with around 10 children in each class though Fiona remembers that the numbers would decrease each year when the boys left to go to Prep School. Her cohort were taught by Mrs Mortimer for the majority of their lessons and what an incredible teacher she sounds. Under Eve Mortimer’s tutelage, alongside the traditional subjects taught to Primary School pupils, they were taught French from the age of 5 and Latin from the age of 8 and were well set to achieve good results as the first pupils at Crescent School to sit the 11+ exams.

It was while talking about her memories of her classroom that Fiona really helped bring the school to life. Based in the upstairs classroom at Horton Crescent, Fiona remembers that there was a paraffin stove in the centre of the large classroom during particularly cold weather and that the pupils got up hourly for some exercise – well needed I’d imagine in the depths of winter! She recalls the great excitement that the children felt when they listened to the weekly radio programmes – from Charles Chilton’s ‘How Things Began’, Fiona learned all about dinosaurs and ‘Music and Movement’ formed an integral part of the school’s PE programme. (As an aside, I remember using Music and Movement tapes to teach PE when I started teaching so either I am old or the programme has clearly stood the test of time).

Taking on roles of responsibility was a key aspect of life at Crescent School, being the ink monitor meant taking charge of refilling ink pots and handing out pens. Whilst for Assembly, the chair and hymn monitors were responsible for converting the classroom into a ‘hall’ quickly and sensibly. While Fiona doesn’t remember religion featuring particularly heavily in the school day, it appears that the Rugby School chaplain who led the weekly service for children of the Rugby masters must have told Mrs Mortimer what songs were in the upcoming Sunday service as she spent the week practising them with the children. Little details like copying lines of letters into their handbooks whilst practising cursive writing and learning to count using cowrie shells that were stored in milk tins are the sorts of details that are not captured in official records but are what embody the spirit of a school and why I was so thrilled when Fiona generously agreed to speak to me. The story of a pupil coming to school wearing their cardigan inside out but refusing to change it in case it was bad luck also made me chuckle.

As well as renting one of Rugby School’s buildings, Crescent School also had the opportunity to benefit from other Rugby School facilities. Fiona remembers walking as a ‘Class Crocodile’ to the field for school sports day and performing concerts or plays in the Music School. Whether there was quite the same enthusiasm for benefitting from swimming in ‘The Tosh’ is to be debated – every pupil that I have talked to remembers how bitterly cold it could be.

The children may also have spent time together outside of the normal school day. They might have seen each other at the Saturday morning woodworking classes that Mr Mortimer led (where Fiona made a stool which she still has today, as well as a bird box) or at the weekly service that was held in the Memorial Chapel. Living near to each other meant that strong friendships were quickly formed within the small community, and the children felt a close connection to each other due to their shared circumstances. These bonds led to lifelong friendships that are a hallmark of the special school that Crescent School is. It is with that in mind that I would like to end this month’s post by passing on my condolences to the Crescent School community on the recent death of Sarah Roer (nee Willans) in Canada. My thoughts are with all those that knew her at this sad time. 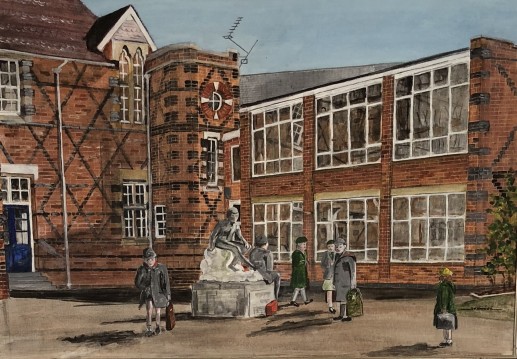