Alongside the academic education that was offered at Princethorpe, building a girl’s character was key and this is clearly evidenced in the stories I am highlighting this month.

Whilst Marie Granger never stepped foot in Princethorpe, it is fair to say that without her there would have been no St. Mary’s Priory. Born in Paris in 1598, Marie Granger was of Scottish and French descent. After attending her older sister Genevieve’s Clothing Ceremony, Marie realised that it was also her calling to join a religious order. Despite initial opposition from her parents, she joined the Abbey at Montmartre and was accepted to the habit in 1619, adopting the religious name Sister Mary of the Assumption. In 1630, Marie Granger was persuaded by her brother Pere Granger to establish a priory at Montargis comprising of young, fervent nuns and she asked her sister, Genevieve, to join her to help. 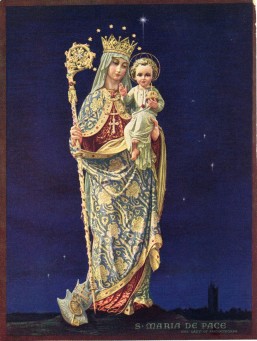 Marie Granger initially intended the coat of arms for the new Community to be a figure of the Blessed Mary as Montargis was to be dedicated to Our Lady of the Angels (as is our Chapel at Princethorpe). However, shortly before she left Montmartre, she received a vision of the Lord bearing a cross on which a bleeding heart transfixed by three nails and surrounded by a crown of thorns was placed and realised that this should be the symbol for the Priory instead. This symbol can still be seen within Princethorpe College today. Marie Granger also insisted that Montargis was founded as a Priory rather than an Abbey. Her experiences at Montmartre had reinforced the amount of influence outsiders were able to have in the political and daily life of the Abbey, including the distribution of the wealth. To ensure that her clear vision of a devout priory was not interfered with, she named the Virgin Mary as the Lady Abbess, knowing that no one could interfere or displace such a holy figure.

Despite having multiple spells of ill health, Marie Granger was successful in founding a devout and successful priory that continued to flourish after her death. It was that Community at Montargis that were the Benedictine nuns who were forced to leave France in 1792, and eventually founded Princethorpe Priory in 1832.

Attending St. Mary’s Priory was a bit of a family tradition for the O’Brien girls. Sicele’s mother, aunts and sisters were all pupils too. Sicele’s aunt, Hilda de Trafford, also helped to fund the building of the new chapel through the dowry she brought when she joined the order.

In 1902, Sicele appears in the first Peeps magazine when she was a member of the Lower IV Form, and it was a very busy year for her. She managed to win prizes for Mathematics, English and Languages, Croquet in the Tournament of Games, alongside passing the senior Division of the Local School Examination for Music (which was held for the first time at the convent). She was also chosen as the ‘Angel’ for Sister Mary Gabriel’s Clothing Ceremony which was a very great honour for a pupil.

It was after Sicele left the convent that her life becomes even more fascinating when she becomes one of the first female aviatrix. After receiving medals for being a driver for the First Aid Nursing Yeomanry Corps during the World War One, Sicele took that determination and bravery one step further. In the 1920s, Sicele was awarded a commercial pilots licence – only the second woman in the UK and Ireland to achieve this – and ran an air taxi service. This was not enough for her though; she also took part in multiple races winning the Aerial Oaks in 1926 and setting a British Altitude record in 1928 with Lady Heath.

Sicele’s luck was not to hold though as she was involved in a serious accident in 1928. News of the accident even made it into the Peeps with the following extract being published in the Peeps magazine, who were rightly proud of Sicele’s connection to St. Mary’s.

Sicele was forced to have her leg amputated as a result of the injuries but she remained passionate about flying and continued to write articles, organise air rallies and fly with her artificial leg. She even made time to become one of the founders of the Aviation Ambulance Association of England.

The 1931 Peeps alerts us the tragic end to this heroine’s life. Sadly, at the age of only 44, Sicele was not to escape from another aircraft crash. Shortly after take-off from the airfield at Hatfield, the plane crashed killing both her and Enid Gordon-Gallien. As you would expect, the Peeps committee offered their condolences to Sicele’s mother and family. They also took the opportunity to thank Lady O’Brien as she had donated Sicele’s Court train, which they promised would be made into vestments at the Priory and hoped it brought her some consolation.

A trailblazer in the financial world was Oonah Keogh (also spelt as Una and Oonagh at various times). The first mention of Oonah in our St. Mary’s records is when she took the part of Clara in the Little School’s production of Uncle Jack in 1913 Peeps magazine. She was following in the footsteps of her sisters, at least four of her sisters were educated at St. Mary's. The only other mention of Oonah as a pupil in Peeps is when she was appointed as a prefect in October 1922 in what must have been her final year here.

Oonah wasted no time after leaving St. Mary’s in carving out her own path in life. After travelling in Africa and Europe, she joined her father’s successful company ‘Joseph Keogh and Company Stockbrokers’. In May 1925, she applied to join the Dublin Stock Exchange and was admitted after a short deliberation by the committee. In what was a case of perfect timing, she benefitted from the ‘Irish Free State Constitution Act’ which prohibited discrimination against women. There would not be a female member of the other major stock exchanges in New York and London until 1967 and 1973. That is not to say she had full access, in those days much trading happened in social situations from which she was still excluded. Old Princethorpians were proud of her achievements and an article appears in the 1926 Peeps magazine chronicling her success, including this photograph of her. 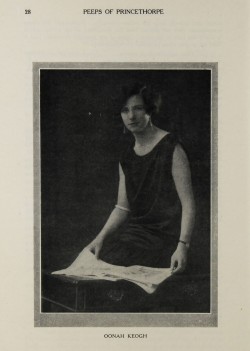 She continued to work with her father’s company until 1933 when it appears that there was a disagreement of some sort after he returned from a bout of illness. Oonah’ s life then takes a new turn when she meets her future husband, Bayan Giltsoff, whilst staying with her sisters Eta and Genevieve. After marriage, Oonah moved to Somerset with Bayan and they began renovating Tudor houses alongside her new role as a mother. Unfortunately, despite ending her business relationship with her father, Oonah’s name was not removed from key paperwork and this would lead to financial difficulties for her in 1939 when her father was declared bankrupt. She was liable for the company’s debts and Hibernian Bank attempted to recover them from her personally. After losing a court case and appeals in 1944, she was liable for the £30,000 debt and all costs. During this period, the Peeps magazine make repeated references to Oonah’s ill health and the worries about the court case could not have helped!

Oonah and Bayan moved to Ireland in 1947 and Bayan’s talent for house renovation continued when he made the newspaper after making the family home out of a derelict roadside farmhouse. After seeing the renovations, the couple are asked to build houses for other people and the exclusive development is still known as 'The Russian Village' due to Bayan's heritage. Sadly, their marriage was not to last and in what must have been quite a shock given the time and their religion, the couple separated and Oonah spent the rest of her life living with her daughter, Tatiana until their death 8 days apart in 1989.

What the Peep’s magazine clearly shows is that St. Mary’s Priory remained a special place to Oonah. She made regular donations of flowers for the December 8th altars and returned for multiple visits over the years. Oonah’s daughter Tatiana also attended St. Mary’s Priory briefly, joining in the Summer Term of 1945. When Oonah moved to Ireland, Tatiana went too with a cryptic reference that ‘her health was stronger but not fit for boarding school yet…’ in the 1947 Peeps and it appears that she did not return as a pupil.

I hope that you enjoyed these short insights into the lives of three strong women who helped shape or were shaped by their time at St. Mary’s Priory. I know that there are many more untold stories and look forward to finding more as I continue my research, but I would love to hear from you too. Please do contact me with any stories you have to share at JanetteRatcliffe@princethorpe.co.uk