You can't fail to be impressed by the verdant fields surrounding the College, idyllic countryside complete with cows and sheep. But Princethorpe has not always been considered good farming land. View to Princethorpe Priory, showing sheep in the fields

As you drive up to Princethorpe College, you can’t fail to be impressed by the verdant fields that surround it, idyllic English countryside complete with cows and sheep. But it might surprise you to know that the Princethorpe locality wasn’t always considered such prime agricultural land and it is thanks to a pioneering local farmer that the landscape we know and love is what it is today.

In about 1760, Joseph Elkington inherited Manor Farm in Princethorpe when he was only twenty-years-old. At that point, the land around Princethorpe was very boggy - a problem that had caused his father to lose many sheep to liver rot. The poor conditions also meant that the land was very poor for growing crops. Joseph Elkington decided to investigate what was causing the conditions, so he dug a 4-foot-deep pit below the level of the spring activity in his fields and then he had a stroke of luck - a servant came past with a crowbar (used for making holes for fence posts) and Joseph borrowed it to make the hole 4 foot deeper. When the pit immediately flooded with water, he realised the problem was that the water was travelling up through the porous ground but was sometimes blocked by a clay stratum. He also realised that the land could be drained by opening up the right passages to redirect the flow of water. The crowbar was later exchanged for an auger, and he set about drying out his own land most successfully. News of his solution quickly spread to his neighbours and then further afield. By the 1790s, it was estimated that thousands of acres of bogland had made usable using Elkington’s ingenious method. This increase in productive farmland was extremely important at the time due to the rapid growth in population from circa 5.2 million in 1700 to over 9.4 million at the time of the 1811 census.[1]

Extract from Johnstone's book describing the condition of Elkington's farm

By 1795, the Board of Agriculture was worried that Joseph Elkington was in extremely poor health. They were concerned that he would die imminently, and that his drainage methods would be lost to the public. So on the 10 June 1795, a motion was raised by the Board of Agriculture President at the House of Commons in which Parliament awarded £1000 in order to make a written account.

As a result of the award, the board hired John Johnstone to shadow Joseph Elkington and visit sites that he had worked on to provide a detailed account of his method in a publication titled ‘An Account of this Most Approved Mode of Draining Land; According to the System Practised by Mr Joseph Elkington’. Johnson’s book gave a detailed account of how to approach drainage of different conditions, including cross-section drawings of different landscapes based on their geology as well as drawings of the necessary tools to be used. The book also contained reports from local agricultural reports and testimonies of individuals as to the efficacy of the method. John Johnstone was keen to emphasise that the farmer had to have a good understanding of their land through close observation of local rivers and riverbeds, vegetation and inclines before they could use Elkington’s method effectively. It should be noted that Joseph Elkington lived on to the age of 67, so predictions of his death were slightly hasty.

How is this all linked to Princethorpe College you might ask? Well, Manor Farm bordered the Princethorpe Priory and there is no doubt that without extensive farmland to support the Priory, Princethorpe would not have been the enticing prospect it was when the Benedictines were looking for a place to settle permanently. There is also clear evidence of the springs that caused such problems for Joseph Elkington proving instrumental in the shaping of what we now know as Switzerland – the lake was formed when a natural spring filled the excavation for the clay used by the original builders.

Finally, one of the best things about being an archivist is that your research often takes unusual turns and that is exactly what happened here – a copy of Johnstone’s book made its way into our archive due to the kindness of Dr. Nick Baker. Many of you will have met Nick at Old Princethorpian events when he was the archivist here until 2017, and we are truly grateful that he continues to support the archives. Rather excitingly, the book that Nick donated also seems to have been a copy belonging to the Elkington family themselves, with Joseph Elkington Junior’s signature on the title page and a book plate for George Richards Elkington, a well-known Birmingham industrialist who was the grandson of Joseph Elkington, on the inside front cover. Exploring Nick's donation has helped uncover a local Princethorpe pioneer who may well have shaped the College land we know and love today but who was also instrumental in improving wider farming practices and feeding a growing population. 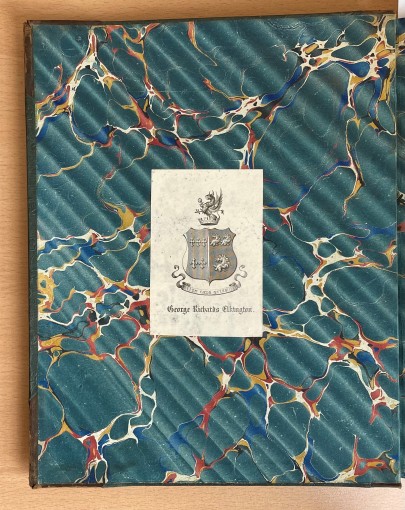 Johnston, J., 1797. An account of the most approved mode of draining land. Edinburgh: Printed by Mundell and Son and sold by G. Nicol.

Upton, C. (2013). Farm engineer Joseph Elkington was an expert in his field. [online] Business Live. Available at: https://www.business-live.co.uk/retail-consumer/farm-engineer-joseph-elkington-expert-3907572 [Accessed 24 May 2021].