Princethorpe Motoring Festival 'On The Road Again' In 2021

This year should have seen the 25th Motoring Festival here at Princethorpe, we couldn't be there in person, so we'll attend in spirit by taking a whistle-stop tour of Motoring Festivals from the past. 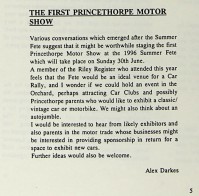 The first mention of the Motoring Festival, at the time referred to as the Princethorpe Motor Show, was in an article written by Alex Darkes for the Tribune Magazine of 1995. In it, he mentioned some preliminary ideas for the event and put a call out for interested exhibitors and parents to get in touch to help organise it for the 30th June 1996. It must have garnered enough interest as the very first Motoring Festival did indeed go ahead on that date.
It was a success from the start with nearly 60 cars taking part in the first festival and the Rover P5 Owners’ Club holding their West Midlands regional rally at the event. While John Boyes won first place for Best Car for his 1931 Lagonda Tower and Steve Allan won first place for his Morgan 3-wheeler, it was the winner of second place in both categories that caught my eye whilst looking at the magazines. Mr and Mrs D.H. Saunders exhibited a ‘Docker’ Daimler Continental which had been shown at Motor Shows as a prototype but never made it to production. This particular car was used by Lady Docker herself.

Some of you might not know but there is a link between the Docker Family, Daimler, and the Foundation School, Crackley Hall. After the Sisters of Mercy purchased Crackley Hall in 1944 from John Siddeley, 1st Baron Kenilworth (another family with a strong motoring heritage), they realised that they needed more space for the school itself. The Sisters purchased the Gables in 1946 and it then formed the main school building for generations of the school’s pupils. The Gables was purchased in 1902 by Frank ‘Dudley’ Docker and the family lived there until he moved to Amersham in 1934. Dudley Docker also arranged the purchase of Daimler Motors in 1910 and his son, Bernard, who would have grown up in the Gables, was also chairman of the Daimler Company. After the Docker family sold it in 1934, The Gables was then known as the Armstrong-Siddeley Hostel presumably because it was used to house members of staff there. 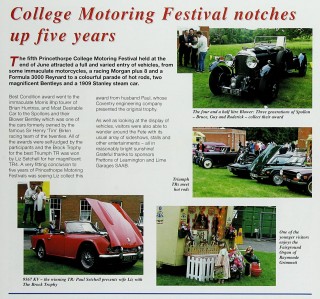 The weather in 1997 was not very helpful with torrential rain making the Orchard waterlogged so that the festival had to be moved to the hardstanding on the playground. This didn’t stop the dedicated motorists though with more than 35 exhibitors taking part. Alongside the scoop of the new Skoda Octavia which wasn’t being released in the UK for another year and Coventry University displaying a range of ¼ scale styling models, Les Maybury won the prize for Best Condition Award for his Jaguar XK120 which was on the road again for the first time in 15 years after extensive restoration. 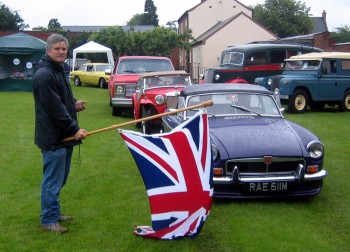 Never one to stand still, Alex Darkes and his team looked for ways to innovate and diversify the Motoring Festival. In 2002, the first Road Run was held in which cars completed a route of about 30 miles around local countryside. This has been a core component of the festival ever since. From 2007, a check point was added to the route where participants received a stamp part way through the route on their stamp card, along with the coveted commemorative plaque for taking part of course. A tradition that continues today.

After commercial vehicles joining the range of vehicles on display from 2005, in 2006 the Motoring Festival finally broke the barrier of having 100 exhibitors at the event after having come extremely close for the previous couple of years. A record 130 vehicles of all shapes and sizes were exhibited with over 60 taking part in the morning’s road run. It seems to be particularly fitting that this happened on what was the festival’s 10th anniversary.

Over the years since the Motoring Festival was founded, Princethorpe College has been proud to welcome all manner of people and vehicles to the grounds including cars, motorbikes, commercial vehicles (including a gyrocopter in 2012), dedicated enthusiasts from DAF, MG and Triumph Stag owners’ clubs, and members from the Old Lawnmower Club. None of this would be possible without the hard work and dedication from Alex Darkes and his team to whom we owe a massive thank you and we look forward to welcoming you back in 2021! The Old Princethorpians’ Pub Meet at Inside the 22 in Rugby on Friday 6 March, was the association's most popular pub meet ever. More... Since we can't get out into nature in our usual way, I thought that I would bring nature to you in the form of beautiful… More...